As China seeks to grow its global economic stature, its new economic growth model is becoming an even larger priority. Their previous growth model relied heavily on cheap, excess rural labour, which fed cheap manufacturing, meaning China supplied the world with cheap goods. This in turn fed urbanisation and a mass demand for property and infrastructure investment, a model now considered out of date.

China’s new demand-consumption-led growth model is not a choice, but rather an absolute necessity, due to new shortage of cheap rural labour, a slower rate of urbanisation, and changing demographic trends. 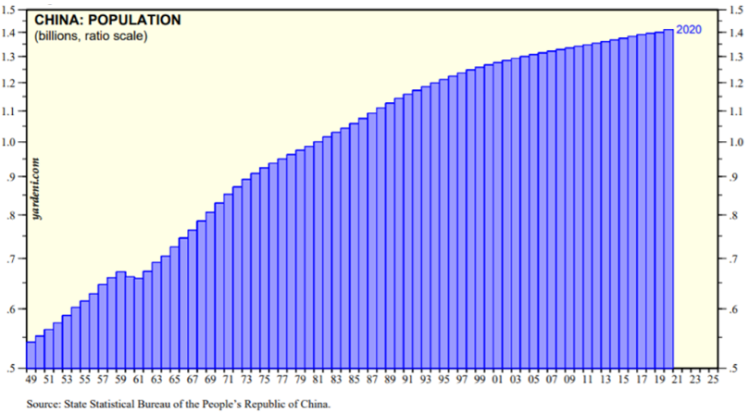 In the 30 to 40 years leading up to 2010, China witnessed an ever-increasing pace of urbanisation as tens of millions of rural residents flocked to the cities, annually, in anticipation of a better life. This constant stream of relatively cheap labour fueled the demand for housing and boosted property prices to levels that are now unaffordable to millions.

World cities like London, New York and Tokyo are not generally known for affordable residential property. However, sky-high prices in these cities pale in comparison to what Chinese citizens have had to pay over the past 20 to 30 years.

Based on research by the National Bureau of Economic Research in the United States (US), home price-to-income ratios in 2018 already highlighted the unaffordability of Chinese residential property prices at the time. As an example, for the average person to have owned a home in Beijing and Shanghai in 2018, they would have paid more than 45 years of annual salary whereas the average person in London would “only” have paid 22 years’ worth of annual income to own a home. In Tokyo and New York, which are renowned for their exorbitant property prices, you would “only” have spent between 10 and 15 years of annual income to own a home.

Based on research by numbeo.com, the current price-to-income ratios for Beijing and Shanghai are 52 years and 44 years of income respectively, while in Tokyo and New York, home prices are currently trading at 13 times and 10 times annual salary, respectively. For further comparison, the average property price for the UK as a whole is a more affordable 7.5 years of average income, whilst the property price-to-income ratio for Peregrine Wealth Limited’s home jurisdiction of Guernsey is 14.6, still some way behind levels in China.

According to numbeo.com, the most expensive city currently for a home buyer is Damascus, in Syria, where a home would cost you more than 100 years’ worth of average salary. This is followed by Accra in Ghana, which requires 65 years of income, and Beijing ranking in third place. The cheapest city currently for home purchases is Memphis in the US, where a potential home buyer would need only 1.22 years’ worth of income to purchase a home.

WHAT HAS BEEN DRIVING EXTRAORDINARILY STRONG HOUSING DEMAND (AND PRICES) IN CHINA OVER THE PAST 20 YEARS?

Strong annual economic growth – especially since China joined the World Trade Organisation at the end of 1999 – of more than 5% per annum has boosted consumers’ income growth while urbanisation and favourable demographic trends, especially in the 15 to 64-year-old working age population cohort, played an important role over the last three decades. This was further supported by limited investment alternatives due to China’s closed capital accounts. High savings ratios and strong household balance sheets have also spurred demand for housing while cultural support for property ownership provided an additional boost.

The scale of the Chinese real estate boom over the past 20 years has been unprecedented. Although the year-on-year pace of growth of new home prices in China’s 70 major cities has receded to about 2% currently, the level of house prices is still sky-high across China’s major cities. One could perhaps argue that prices are justifiable if the expectation is for super-fast economic and personal income growth to continue indefinitely. However, China is facing demographic headwinds, and lower future economic trend growth rates, which will force income growth down too.

Some argue that China reached its “Lewis turning point” in 2010. This is the point in economic development when surplus rural labour is fully absorbed into the manufacturing sector. When an economy has reached its Lewis turning point, it typically requires a more balanced economic growth model going forward; one that relies less on cheap manufacturing and exports, and more on consumption. If China is indeed already beyond its Lewis turning point, which we suspect they are, the impact on China’s property market and the implications for China’s growth model should be carefully considered.

Housing demand can generally be seen as being driven by a combination of the level and affordability of house prices, population growth, and income growth. For China, house prices have become unaffordable, income growth is likely to slow as economic growth slows towards potential growth of 4% to 5% in coming years, and population growth has already peaked. This does not bode well for China’s property market, and for its contribution to economic growth going forward.

China is currently experiencing a sustained reduction in new household formation, which is a function of their ageing population and the long-term consequences of its policies to slow population growth. One could argue that most home buyers are typically in the 20 to 50-year age bracket. This cohort of people in China is shrinking, and the abolition of their one-child policy in 2016 is unlikely to reverse the downward trend.

Research suggests that birth rates are inversely correlated with economic development, urbanisation, and female education. In China, GDP per capita has steadily increased over the years, the proportion of females with tertiary education has gone up, and urbanisation has risen sharply over the past 20 years. The combination of these factors would suggest that China’s birth rate is unlikely to recover any time soon. The reversal of its one-child policy may slow this trend, but it is unlikely to stop the declining birth rate, which is also negatively impacted by changes in preferences for having children, and the high cost of raising a child.

China’s other challenge is that urbanisation has reached the point where more than 90% of urban households (estimated to be +/- 280 million) already own a home. In addition, China’s urbanisation rate already stands at 60%. Government’s target is for the urbanisation rate to reach 65% by 2025, which implies a much slower rate of urbanisation growth in the future.

China’s working age population – 15 to 64-year-olds – peaked around 2010 and has declined since. Research conducted by BOCOM International in 2021 suggested that the number of Chinese in the country’s home-buying cohort – those aged between 35 and 55 years – will also peak soon. Historically, in other countries, when this has occurred, house prices have typically peaked a couple of years later.

WHAT DOES PEAKING HOUSE PRICES MEAN FOR CHINA?

Household leverage ratios – which reflect household debt as a percentage of the size of the economy – in China currently sits at around 60%, compared to less than 20% in 2008. Outstanding mortgages account for roughly 70% of total household debt in China and residential property accounts for 60% of Chinese households’ total assets. Also, more than 40% of households in China own two or more houses.

Policymakers in China have realised that this situation is unsustainable and dictated via their 14th five-year economic growth plan, for 2021-2025, that housing is for living, not for speculation. In other words, housing should be available to all, not just for the rich. In essence, China wants to adjust home prices downward without collapsing the property market, as they need lower, and more stable home prices for residential property, to make it more affordable for lower income buyers too. This speaks to the core of China’s “Common Prosperity” drive which is aimed at narrowing the wealth gap and reducing inequality.

For China, common prosperity is not about redistributing existing wealth involuntarily. It is more about devising a fairer process to share the fruits of economic development with more people. China’s property sector is a specific focus area of this policy. Government needs to reduce property prices to increase affordability for the lower- and middle-income classes.

New regulations, laws and taxes have been introduced to reduce housing supply, and debt, while future demand for property in China is unlikely to grow at similar rates than in the past, due to China’s challenging demographic trends, lower urbanisation growth rates, affordability challenges, and already high levels of urban housing ownership in China.

This is at the heart of China’s new economic growth model which is not so heavily dependent on property and investment growth anymore but aims to move the economy to a point where consumption can lead growth.

This, in our view, has become an absolute necessity, not a choice.

At Peregrine we are considering these significant changes to the structure and profile of the Chinese economy in our growth outlook, valuation models, and where and how we look for investment opportunities in China.

[*] In China, property ownership conveys status & provides access to better schools, while home ownership is also generally viewed as a prerequisite for marriage.

Our website uses cookies to ensure you get the best experience. If you continue to use the site without changing your cookie settings we assume you consent to the use of cookies on this site. Read More
ACCEPT
Manage consent

This website uses cookies to improve your experience while you navigate through the website. Out of these, the cookies that are categorized as necessary are stored on your browser as they are essential for the working of basic functionalities of the website. We also use third-party cookies that help us analyze and understand how you use this website. These cookies will be stored in your browser only with your consent. You also have the option to opt-out of these cookies. But opting out of some of these cookies may affect your browsing experience.
Necessary Always Enabled
Necessary cookies are absolutely essential for the website to function properly. These cookies ensure basic functionalities and security features of the website, anonymously.
Functional
Functional cookies help to perform certain functionalities like sharing the content of the website on social media platforms, collect feedbacks, and other third-party features.
Performance
Performance cookies are used to understand and analyze the key performance indexes of the website which helps in delivering a better user experience for the visitors.
Analytics
Analytical cookies are used to understand how visitors interact with the website. These cookies help provide information on metrics the number of visitors, bounce rate, traffic source, etc.
Advertisement
Advertisement cookies are used to provide visitors with relevant ads and marketing campaigns. These cookies track visitors across websites and collect information to provide customized ads.
Others
Other uncategorized cookies are those that are being analyzed and have not been classified into a category as yet.
SAVE & ACCEPT